The Singapore Grand Prix has become one of the true marquee events on the Formula 1 calendar. It was the first race of its kind (a street circuit and nighttime competition for Formula 1) in Asia, and has been running since 1966 in one capacity or another. Now, though the F1 schedule can change from one year to another, Singapore is a permanent fixture. Below are a few of our best tips for enjoying the event if you get the opportunity to go. 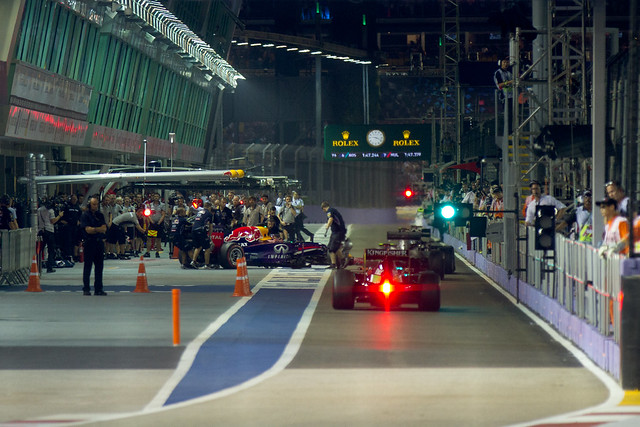 Another guide on making the most of the Singpaore Grand Prix spent a lot of time talking about tickets, and we’d direct you back to that guide for reference. The idea, generally, is to book as early as possible (ideally when tickets go on sale in April). This is in part because the event will sell out, but also because you can get some good deals buying early as opposed to waiting until the last minute, or going through secondary markets. Additionally you’ll want to take some time researching the different kinds of tickets you can buy, some of which offer more access throughout the event than others.

Attending the Singapore Grand Prix is unlike many other sporting events in that it can really take up a full day and night. You’ll want to get to the course as early as possible so as to stake out a good vantage point (within the area you have access to with your tickets of course). Then there’s the actual race. On top of that, however, there is also something of a festival that surrounds the circuit, such that it’s always worth sticking around after the race. At the very least you’ll be able to attend a concert, likely with a fairly major act or two on stage.

One thing fans don’t always realize until they attend a race is that each grand prix really is its own competition. The drivers are ultimately competing for year-end honors, but there’s value in winning or establishing a streak at a given venue as well – which means it’s always fun to brush up on your history of a grand prix you attend. Taking the Singapore Grand Prix for instance, it’s nice to know that Sebastian Vettel, who’s still competing near the top of the standings, holds the record with four wins at the Marina Bay Circuit. In fact, one write-up last year called him the rightful favorite from a purely historical, technical and skillful level, despite the fact that Lewis Hamilton is always the likely winner these days. This is all fun stuff to know come race day.

This is only necessary if you’re intending to capture good pictures of the action. However, if that’s something you’d like to do, you really will need the right equipment. A standard smartphone camera just isn’t going to get great looks at F1 cars whizzing by at high speed – particularly in the setting of an evening race with lights overhead. We’d recommend if this is important to you doing some research on what types of lenses and shutter speeds people get the best results with at similar events, and preparing in advance.

This may sound trivial, but having a good understanding of the expansive grounds can serve you well. You’ll be navigating in large crowds and with a lot of things going on, and it helps to know where things are and what the best ways to get around might be. You can find a circuit park map for the grand prix online, which makes it fairly easy to study and learn your way around in advance.