As she does, she’ll begin to understand what sort of face she wants to present to the world as an adult.

But until then, she’ll worry and get more and more lost… 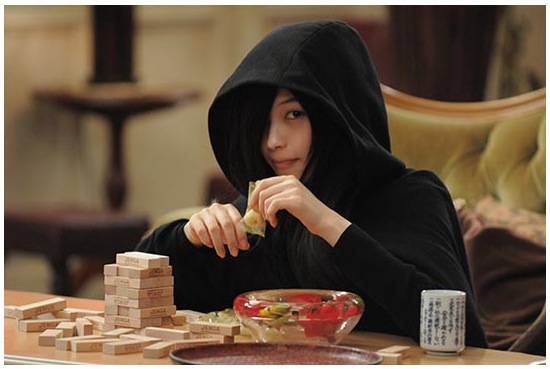 This girl, Sunako Nakahara gave up on all beautiful things.

Some things I grabbed from watching this Japanese live action series Yamato Nadeshiko Shichi Henge. Â It started out with an anime version and then they made a live action series of it. Â It’s one of the best comedy / dramas I’ve ever seen in my life. Â This and Hello, My Sweetheart from Taiwan.

They say, Japanese people are conservative. Â That they just don’t show their feelings and that what happened in the live action series doesn’t really happen in real life. Â But creating series like this, and these wonderful stories, is one way of expressing themselves.

Anyway, Â I reflected a lot on that tv series. Â Mainly the theme was society’s brutal expectations of us humans, and how we should embrace our own character and be ourselves. Â It talks about beauty in and out. Â It will make you think about the definition of “lady” and “love”

In this series, they talk about women dressing up as armor. Â – armor of confidence.

Anyway, I just finished the series last night and I am highly affected. Â In a good way, it made me believe in love again. 🙂

2K Following
6K Followers
This Is Why I Have So Much NANO In My Portfolio https://t.co/69NXprGp70 via @YouTube
17 hours ago
It's my @Reddit birthday today! https://t.co/9O5WyyT8Qq
22 hours ago
Hello #nanoverse! I'm so happy that local shops like @ParisdeliceP accept $nano currency! Convenient home deliverie… https://t.co/snYNCDAQxe
23 hours ago
Follow