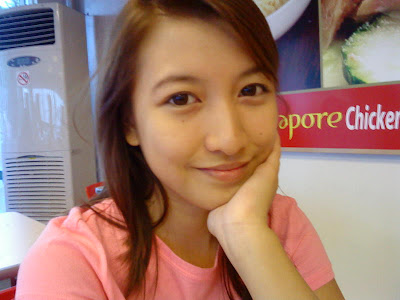 I was live blogging on my other blog earlier when we were eating at Signapore Chicken Rice â€“ AGAIN!  Itâ€™s yummyliscious!  One of our friends visit Singapore Chicken Rice restaurant 3 times a week!  Imagine thatâ€¦ the Chicken Rice and Chicken Curry are just the best!

After eating we headed straight to the newly renovated Ali Mall.  I donâ€™t often go here.  In fact the last time I went to Ali Mall was last year and trust me, the mall did not really appeal to me a lot.  This time however, itâ€™s newly renovated!  We strolled around and I liked how the mall looks now!  The nice part is that the movie theater looks like the one in greenbelt where the chairs are stacked up way above each other so that you wonâ€™t see any irritating heads of other people.  Iâ€™m not sure if they have any movie theaters here before but this one is just nice, clean and I love it!  This is one of my new favorite movie theaters now since itâ€™s clean, nice, well-designed and not a lot of people know about this yet.  But since I blogged about it now, this theater could get more viewersâ€¦ HARRR!!!

They were not showing the 3D version of Alice in Wonderland though.  Itâ€™s all fine still because I still enjoyed the movie!  I know movie critics have graded this movie half and half (some like it, some donâ€™t) but I appreciate the movie and I love how it went :)  Iâ€™d give it a 9 out of 10.

After the movie, we strolled around and ate at Big Better Burgers.

Then when we got home, I just had to write for a news article and write about the Formula 1 Qualifying results in Bahrain 2010.  Do read if you are a fan! ^_^

Then, I shall retire to sleep now because tomorrow I will watch the Manny Pacquiao vs Joshua Clottey fight live!  I will bring my laptop of course for live blogging purposes.  I just hope I donâ€™t run out of battery!  I need to upgrade to a more high-powered laptop!  Sponsors? Anyone? 😉